Retreating to the (relative) safety of their room, the group discusses whether they really want to sell the gem. Lily hypothesises that the gem can control the dragon, but then follows it up by stating that her magics aren't strong enough to handle a dragon, so selling the gem ASAP is a good idea. She also discloses that she saw in the room behind the wizard a crucified man with a pool of blood and severed limbs beneath him, his eyes sown shut and that he may have been alive. (EL: I -think- Neal goofed here, and thought that Lily saw what Tyrant saw. Lily was only peeking at his book.)

December may have seen Wishmaster; she's weary of how these sorts of deals with wizards could go down. They resolve to inquire about town after the wizard's name or magic types. It seems not many have met the wizard in person, but that his reputation is to be all-powerful and terrifying.

Lily attempts to bribe a guy into spilling some more information about the Wizard, but he bails on her taking her money. Lily has a drink to console herself, and then goes to bed.

Lily spins her own version of the Pirate Code to Fe about why she shouldnt have had 5 gold 'stolen' from her last night. December meanwhile is very ready to get back to their ship, and hustles everyone out to go back to the wizard's tower.

The wizard is very interested in the gem, sniffing and even licking it once, but seems satisfied with it. He invites them up to a parlour to sit, while he goes and performs a quick couple of tests on the gem, offering refreshments. Fe partakes in the food readily, Lily goes looking over his bookshelves, which mostly deal with History, and while December evaluates the room for stealables and any hidden doors, which she does not.

The wizard returns, content with his tests. He states that he cant find a ship by the name of BanaNARS anywhere, and asks them for descriptions of anything that might help point him to the obviously-renamed ship. They eventually describe Jefferson and Matt, which he thinks he can trace.

After another brief pause to go gather things. He returns with a dish, containing a pouch of money, a pair of daggers, a rod for someone Lily's size, and a rerebrace. He deposits the items, and departs again to attend to his searches.

Each party member takes the item obviously given for them. December's blades are made of an odd sort of metal she doesnt recognize. Fe puts on the rerebrace, which appears to be made of platinum or silver and has some gems, possibly diamonds, embedded in it. Lily's rod is made of an old wood that feels smooth and warm to the touch, with a root-flared styled top to it.

A few hours later, the wizard returns to declare that he has found the ship, which is now named the Sunken Stone. The group universally pans the new name, and determines to put a new name to it as soon as they've recovered it. Lily attempts to get the wizard's name, but he deflects the inquiry, by asking his own questions about how the group managed to actually get the gem.

Fe takes some of the offered food with her, and December 'steals' 3 apples.

The Wizard offers the information that the Sunken Stone is in Black Shore, and that all of their items are enchanted, and to be careful not to lose them. That they will strike truer and harder than any dagger she has ever swung. Fe's rerebrace will make her more resistant and stronger. Lily's staff will aid her in her spellcasting. (EL: Intentionally vague.)

Avoiding the directed questions about his name once again, growing slightly annoyed, the wizard leads the group upstairs to the laboratory, where a lot of strange things are observed, but no sign of the crucified man other than a pair of shackles hanging from the wall. He escorts them over to a 6' circle of carved metal, and bids them stand in it.

The wizard casts a spell, causing hazy visions and almost makes Fe sick as the teleportation whooshes them off to Black Shore, landing on the deck of a ship.

Looking about, they spot Flint looking over the railing of the ship. Shouting, they charge the dwarf.

MINOR COMBAT: Toss the Dwarf. Fe smashes Flint in the nose, drives his septum into his brain, and kills him in one blow. They toss his corpse into the hold.

December overacts their way out of freaking out people on the dock, and shoos Lily and Fe down belowdeck, especially when Fe paints warpaint on her cheeks in Flint's blood.

In the hold, they find Flint's body, a full load of cargo under tarps, but none of the treasure they once had. Heading for the captain's quarters. The quarters are much more.. opulent. The bunk beds are gone, replaced by a large, comfortable looking single bed, more well appointed furnishings. December finds ladies' undergarments under the bed. December decides that noone in the party is allowed to give Jefferson their underware. Fe and Lily probably would, though.

They realize that they cant sail the ship with only three people, and partially regret killing Flint. They find a total of 50g in the quarters, no sign of their fortune or Fe's quest items. December suggests spending the 50g on the most shady looking sailor they can find to get them sailing again. Lily points out that doing so would negate vengeance on Jefferson.

Fe, in the course of scouring the ship for her items, comes across a person in bed. Ripping the cover off of them (EL: .... yeah i'm just gonna leave that one as it lies.), she reveals a sick man, who's coughing and hacking, barely able to speak.

The man is in no condition to sail, but doesnt hold any loyalty to Jefferson. In fact, he hired Jefferson to transport the cargo. December suggests tieing him to the bed to keep him from going anywhere, which Fe does. (EL: ...)

December sets up an ambush, intending to wait for Jefferson to return. Meanwhile Fe and Lily go into town to recruit a seaman, any seaman. Tavern crawling, eventually leading them to the Empty Tankard. Selecting the "most drunkard looking bad boy", they pitch him 50g for the voyage, which he accepts readily. Fe and Lily help him stumble back to the ship, and he starts preparing the ship for sailing, giving his name as Nathaniel (Appearance 9).

Fe takes a phial of Flint's blood from his corpse, which they hide, and then take up their ambush positions as well.

Four hours later, a couple of people board the ship that the party dont recognize. They look more like businessmen than sailors.

Lily puts the three to sleep, promptly causing one to fall into the water beside the boat. This causes a couple of passersby to notice and come running, and causes December to urge Lily into Wall of Fog'ing the side of the ship. Fe grabs the bodies of the two remaining sleepers, tieing them up also and depositing them belowdecks. She finds Nathaniel down there too, sleeping partially underneath a barrel. She grabs Nathaniel and brings him topside. Meanwhile, the rest of the party resumes their ambush positions.

A half hour later, Jefferson approaches the ship, looking pissed, with a group of 6 guards. He shouts for whoever it is thats on 'his' ship to come down, from his position on the dock. December doesnt answer him. He says it's trespassing, and the guards say he is within his rights to do whatever he wants with trespassers. Still getting no response, he storms up onto the ship, and catches sight of Lily.

COMBAT: Retaking The Sunken Stone/BanaNARS. Jefferson and 6 guards from the town of Black Shore are taken on by the returning captains, resulting in the death of the traitor and a few of the guards; however, the alarm is raised...

Fe phials up some of Jefferson's blood. (EL... yeah, i dont know either.)

The ladies seek out Nathaniel, who is unconciously drunk. Throwing water on him to get him up and sailing. Soon, the ship is underway, pulling out of dock. Guards quickly start to appear on the dock with bows. Lily responds to their appearance with a fireball, blasting them all, but suffering the brunt of their strike as a result..

Once out to sea, December brings up the point of the sick person in the crew quarters. This raises questions of what the cargo is. They go to investigate, and finds slaves in cages. December starts to cut the cages apart, and 30 people are freed onto the deck.

Fe moves back into the cabin to talk to the people they have tied down (EL: And by talk to, I mean she snaps two necks, and grabs the sick man, carrying him upstairs), December administers to the food and water needs of the slaves. When Fe asks who the sick man is, the slaves say he's the slave merchant. The slaves unanimously decide they want the merchant dead, eventually settling on wanting him to walk the plank.

The party offers to allow anyone who wants to, join the crew, but gets no volunteers. They mention that they are farmers, and Lily strikes upon the idea of finding them an island someplace. The spokesman for the group is actually the hottest man they've seen (Appearance 18). They name him Clooney.

The slaves would absolutely love to set up an island where noone would know where they are, but they are a little concerned that the ship will continue to return to bring goods and trade for their continued survival.

Nathaniel sobers up, and starts asking questions about who the captain is, leading to the normal "we're all the captain" debacle. He doesnt want to be a pirate, and has no intention of staying aboard. Lily wants to screw him out of his gold. She's overruled by December and Fe, however.

A 'discussion' about money erupts, prompting Fe to throw 50g overboard, and eventually give all of the gold she is carrying to December. (EL: December splits this money evenly, and so each party member has 221.93 gold from this transaction. Fe retains her platinum.)

The wind dies down for a couple of days, causing a supply shortage on their way to Sunken Landing.

The slaver receives a semi-ceremonial walk-the-planking, left spluttering in the open ocean before he sinks beneath the waves.

Stopping off in Sunken Landing to take care of their supply shortage, the captains drop 270g on food and water and other sundries for 30 people for a month. 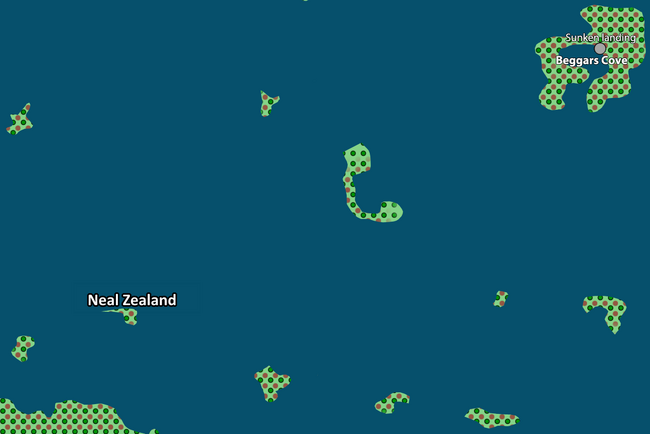 The crew arrives on the island that is to become "Neal Zealand", and offload their new colonists. They mention that they need tools for colonization (axes, shovels, etc, oxen for working..), which the crew agree to get next time they're in town. Lily uses her fireballs to set a forest fire going to clear the land.

The fire has died down, and the colonists disembark to set up shop under direction of Clooney.

Back in Sunken Landing, Nathaniel is dropped off, and some replacement crew is sought. The girls actually decide to give an equal cut to everyone, with extra cuts for Neal Zealand and the Ship (phrasing Neal Zealand as a Haven).

They recruit 10 more sailors for their crew. The First Mate will be elected by the crew, and will command the ship.

Retrieved from "https://regalgoblins.fandom.com/wiki/Misscliks:_Pirate_Edition_Chapter_2_Episode_10?oldid=138972"
Community content is available under CC-BY-SA unless otherwise noted.